Everyone has the right to self-defense, and there are many scenarios in which women may need extra security. It is best to always carry a self-defense device with you that is easily deployable at times of danger.

Violence against women, particularly intimate partner and sexual violence, is a significant public health issue and a violation of women’s human rights. In fact, one out of every six American women has been the victim of rape at some point in her life. Globally, an estimated 736 million women—nearly one in every three—have experienced physical and/or sexual violence.

It is clear that in today’s society, women need to be able to protect and defend themselves more than ever before. In most states, the stun gun is one of the most potent and easy-to-use self-defense devices available to women.

Check out our top picks below if you are interested in purchasing your own pocket stun guns.

Pocket stun guns are powerful self-defense weapons requiring little strength or training. They are inexpensive and small enough to fit in a pocket, allowing you to take them with you everywhere you go.

When looking for the best pocket stun gun, keep the following things in mind:

To be effective, your chosen stun gun must be simple to use. That implies it should be tiny enough to fit in your palm and light enough for you to feel comfortable holding it. Large or heavy stun guns will be challenging to carry and use, making them less effective. As such, purchasing a stun gun with the right weight and dimensions is crucial.

The best pocket stun gun you could purchase is the user-friendly one. We recommend units that can be easily activated with a push of a button or a click of a switch. This allows you to spring into action and deploy your stun gun at a moment’s notice.

Ideally, two safety mechanisms should be available in a stun gun. The first is to keep the device from being accidentally discharged, while the second keeps it from being used against you.

When using stun guns, voltage is not the only thing you should consider. The higher the voltage, the faster your target gets immobilized. However, the actual power of a stun gun is measured in microcoulombs (μC) rather than voltage. The higher the C value, the more it would hurt.

For more information on how stun guns actually work, you may visit this article by Security Forward.

Stun guns are an excellent device to subdue an attacker in a non-lethal manner while being powerful enough to render your attacker completely immobile. They are an excellent defensive tool, and we’ve compiled a list of the top three stun guns for women on the market.

This pocket-sized stun gun emits enough electrical shock to deter most attackers. This device is capable of unleashing 98 million volts on a target, inflicting muscle spasms, loss of balance, and disorientation.

The Vipertek VTS-881 is only 4″ long, so it fits perfectly in the palm of your hand. Additionally, this stun gun has two safety mechanisms: a safety switch to prevent inadvertent discharge and a safety pin attached to a lanyard to keep someone else from using your device against you.

This unit is equipped with rechargeable batteries, which require eight hours of charge before being fully operational. You must also ensure that the safety pin is inserted correctly; otherwise, the device won’t work.

You might be able to thwart a potential attacker without even deploying this device’s 16 million volts of electricity. When dry-fired, the noise and spark it produces are loud and threatening enough to deter most would-be attackers from even approaching.

If they do, simply activate the safety switch, push the Stun Activation Button, and press it against the assailant. This small device simply slips onto your key ring and may be concealed in your pocket or your purse. It also includes a 180-lumen flashlight, which is helpful in low-light areas.

Since it looks and feels like a regular smartphone, this stun gun does not require concealment. Aside from delivering a debilitating shock to your attacker, you can also scare off your assailant by activating a personal security alarm.

This electroshock device also packs quite a punch. With 14 million volts, you can quickly incapacitate your attacker and escape the area unscathed.

Before purchasing a stun gun, check whether it is legal in your state to own one. Check out this article by Security Forward to learn what states allow stun guns.

4 Myths about Financial Crimes Your Bank Staff Should Stop Believing 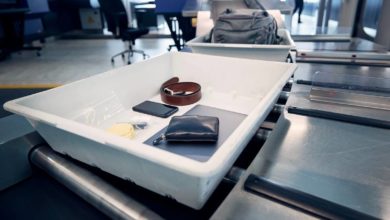 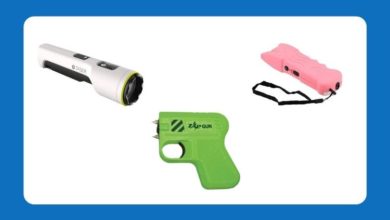 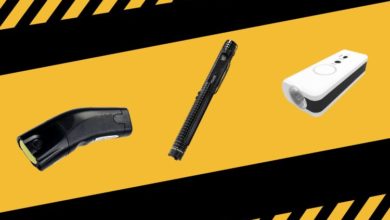