In the United States, vehicle crashes are a principal cause of mortality among children. Last 2018, 636 children, 12 years old and younger, died in car crashes, and almost a hundred thousand more were injured.

Another sad reality is that one-third of the children who died in a crash in the aforementioned year were not wearing seatbelts. However, all these can be prevented, or at the very least alleviated, if parents put an added premium on doing the right car safety practices for their families.

Ways to Protect Children in the Car

Basically, there are two main principles. It would be best to protect the neck and head for the youngest, while those older should go forward-facing using adult restraints.

They need to be adapted to the seat belt. Children have a vulnerable neck that is not developed until after a couple of years. It’s simply not strong enough, and the head is weighty compared to the rest of the body. The youngest kids need to go rearward-facing infant seats, typically the first seat used for the child’s protection.

The car’s rearward-facing seats make sure to protect the child in case of a crash. Normally, this type of seat is used as long as you want to carry the child in the seat with you, up to approximately one year of age. When they outgrow the infant seat, the child should use large rivet binding restraints.

For the best protection, the child should stay in this type of seat up to age 4. The child can use a booster–either a booster cushion or a booster seat, like with a seat backrest. The child needs to use boosters until they graduate to the adult seatbelt. That’s approximately 140 centimeters or ten years of age.

A Rule of Thumb for Parents on Kids’ Car Seats

The most important advice for every parent is to learn the basic anatomy of their kids. Children have a vulnerable neck that is not developed until after a couple of years. It’s simply not strong, in other words. So, the smallest children need to go rearward facing.

We need to carry out this message to everybody to understand the importance of having the children rearward facing. If they end up in a high severity frontal impact, it’s a matter of life or death.

When the children are four years of age, they have enough size and strength to be forward-facing using the vehicle restraints. As mentioned earlier, children should keep using boosters until they’re up to around 140 centimeters or ten years of age, depending on the car’s design.

The safety division states that no one should be severely injured or killed in a new vehicle. So everyone’s well-being needs to be addressed, especially children’s. We know that kids have specific needs; we know that they need to be restrained according to their needs. And the way to address the situation is to make sure that we can get them into their restraints to be protected.

The Value of Airbags

When the first generation of airbags was developed in the 80s, they were aggressive. And there were several severe accidents involving children, many unrestrained kids, which caused several countries to forbid them from sitting in the front seat.

The modern airbag is quite different from the first generation of airbags. The deployment pattern and the way it interacts with the occupants have significantly improved. So, we asked ourselves, with this improvement of technology, do we need to turn the airbag off for a forward-facing child?

In the beginning, this may be a bit confusing, but car companies have clear recommendations on what is valid for your car. However, it will be much more comfortable in a few years since the new recommendation is way easier to remember. Just keep in mind that the airbag should be off for rear-facing children and on for everyone else.

At the end of it all, the use of a car seat, more specifically a child safety seat, is of utmost importance when on the road with kids. Considering that vehicular accidents are one of the main causes of death and injury for children in the United States, it’s not a surprise that every state in the country has a law on the use of children’s car seats. With this, it’s important to know the differences between toddler car seats from kids car seats, as well as understand how to properly position and use each inside a vehicle.

Ways to Protect Yourself and Your Privacy on Online Dating Apps

How Effective Is A Self-defense Keychain With Pepper Spray? 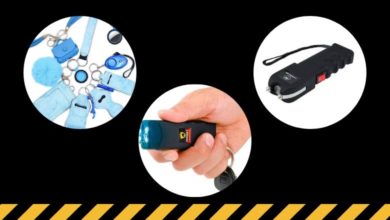 Best Safety Keychain With Taser For Men And Women

How To Move A Gun Safe: A DIY Guide